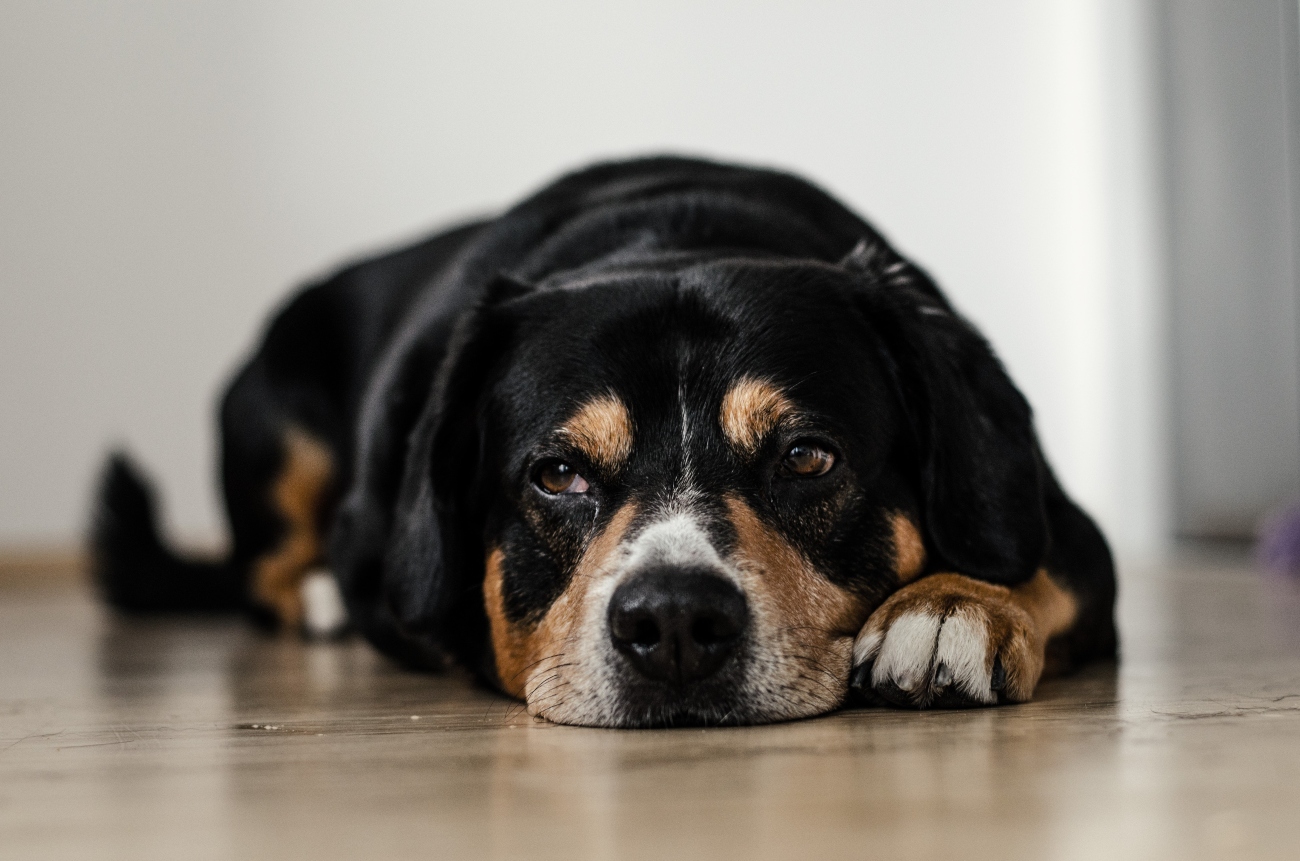 What is cruciate ligament damage in older dogs?

If you’ve been unfortunate enough to rupture your cruciate ligament in your knee, you’ll know just how painful it is. For those who have managed to keep their cruciate intact, let’s just say you’ll want to keep it that way. Most pet owners probably don’t know that their dog can rupture their cruciate, too. Just like us, there’s no obvious reason as to why it happens in dogs.

The cruciate ligament is a fibrous tissue in the knee that joins the femur and the tibia and helps the knee hinge properly.

Experts suggest that damage could have something to do with obesity and weight gain. But it could ultimately come down to genetics, with larger dog breeds such as labradors, rottweilers and pit bulls suffering higher rates of cranial cruciate ligament rupture than some small breeds.

Whatever the cause, if your beloved canine is entering their senior years, you’ll want to have some pet insurance for older dogs in place. That way, if they do suffer cruciate ligament damage, or another health issue, you’ll be able to get them back to full health without the worry of big bills hanging over your head.

Let’s take a look at what cruciate ligament damage is, what treatments are available and how you can help your dog if the worst does happen. 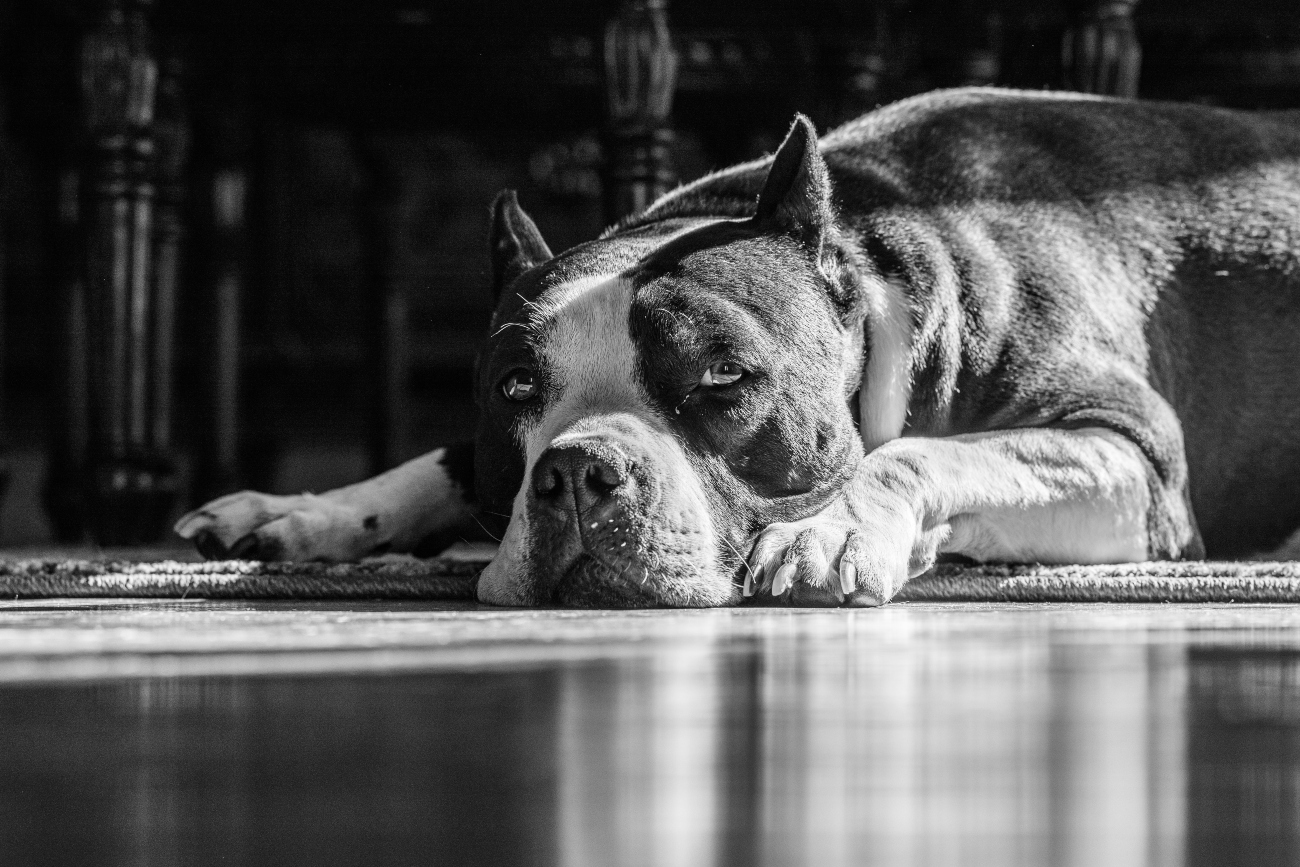 According to Today’s Veterinary Practice, cranial cruciate ligament rupture “is not only the most common cause of hindlimb lameness in dogs, it is also the most common misdiagnosed or overlooked cause of canine lameness”.

It quotes research showing that of 369 dogs referred to a teaching hospital for treatment of hip dysplasia, 32% had cranial cruciate ligament rupture as the primary cause of hindlimb lameness.

It’s for this reason that it's important to raise awareness of cruciate ligament damage especially in older dogs. So if your pet is showing signs of lameness, ask the vet if the cause could possibly be cruciate ligament damage. Remember, Petwise customers have access to a 24-Hour Vet Helpline if you need an expert opinion and fast!

So, what are the signs of cruciate ligament damage?

The PDSA website says that limping is usually the first sign of your dog having damaged their cruciate. Perhaps the limping started after they jumped, skidded, twisted or turned awkwardly – but the injury can come on over time, too (more on that in the next section).

If your dog’s cruciate has ruptured, they are unlikely to be able to put much weight on that leg at all – the knee joint becomes wobbly and often very painful. Their knees might start to swell in size, causing stiffness as your poor pooch gets up and down.

As we say, it’s often very clear that your dog has a problem when they suffer cruciate ligament damage – but diagnosing it as such can be an issue, especially if it’s a partial tear.

Another sign could be that your dog is starting to act aggressively when you try to touch the affected area. Illness and injury are common causes of aggression in older dogs. Discover some of the other causes in our recent article.

What is the function of the cruciate ligament?

The cruciate ligament plays a vital role in the function of a dog’s movement – that’s why they can really struggle to get about when they damage it.

As VCAP explains, cruciate means to 'to cross over' or 'form a cross'. The cruciate ligaments cross over to join the femur and tibia together so that the knee works as it should.

How does the cruciate ligament become damaged?

It’s very rare for the caudal cruciate ligament to be damaged, so for the purposes of this article, we’ll be talking about cranial cruciate ruptures on the whole.

A cranial cruciate ligament can become damaged by trauma or degeneration within the joint over time. In the event of an acute or traumatic cruciate rupture, the damage will be done when your dog makes a sudden movement and more force than usual goes through the knee joint. Excessive rotational and shearing forces are placed on the cruciate ligaments.

Your dog might make movements like this all the time and feel no ill effects. It’s often a bit of a mystery as to why the cruciate ligament ruptures when it does – perhaps your dog’s age or the weight it’s carrying has caught up with it, weakening the ligaments.

Repeated trauma or arthritic disease can cause progressive weakening of the ligament, gradually getting worse until a complete rupture occurs. Because it can happen slowly, your dog might only show slight signs of lameness, until the cruciate completely ruptures. However, with regular check-ups at the vets, you might be able to prevent the ligament developing into a rupture.

If you notice that your dog isn’t quite the spring chicken that it used to be, don’t just assume that it’s down to age. There’s no harm in taking them to the vets, who will carry out a lameness examination. During the exam, the vet will look at the movement of the tibia and femur to see if there is laxity in the knee joint.

Other diagnostic tests such as radiographs (X-rays) may also be undertaken – something that your pet insurance for older dogs might be able to help with. 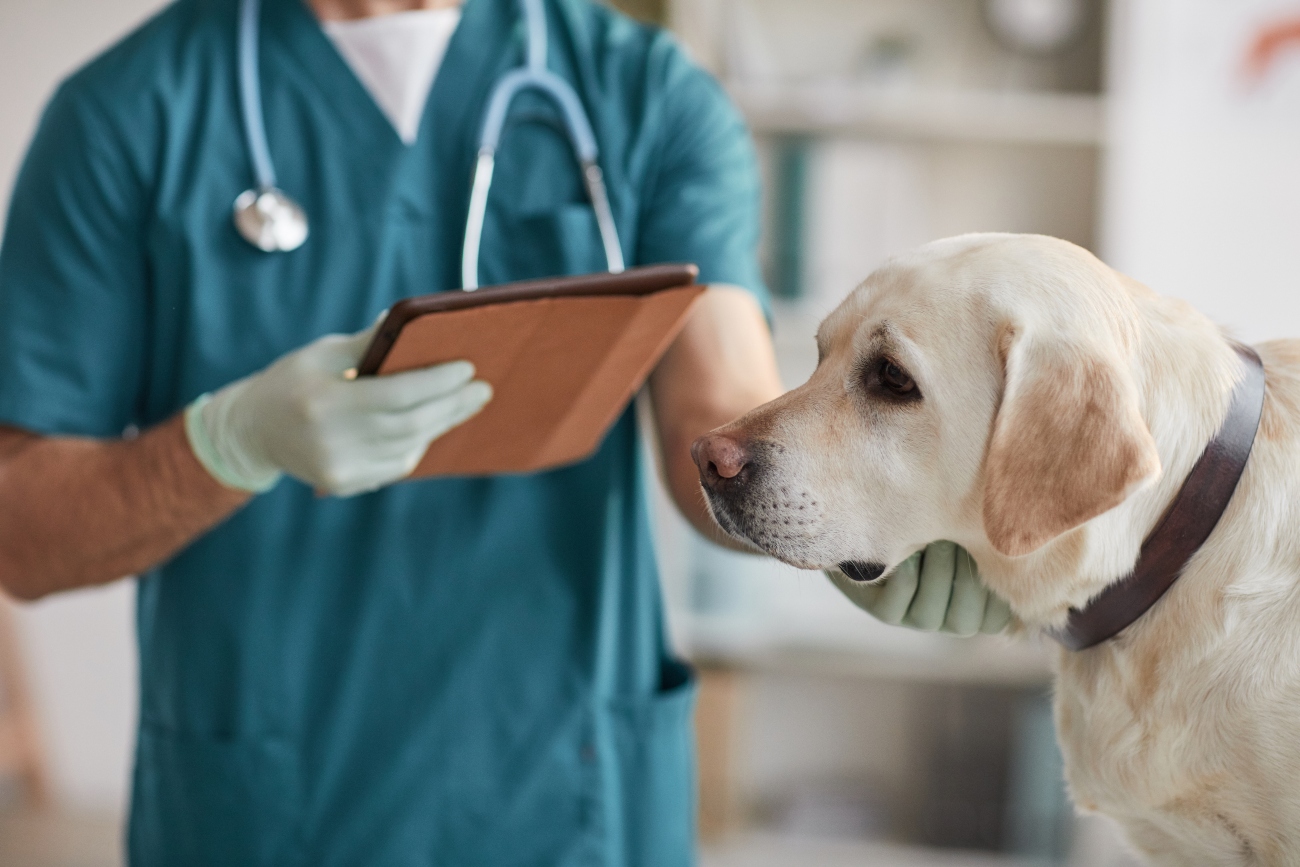 How is cruciate ligament damage treated?

The treatment advised by the vet will depend on the extent of the damage to your dog’s cruciate ligament. However, surgery is normally required to give your dog the best chance of making a good recovery.

It’s important to note that when the cruciate ruptures, this can also impact the pieces of cartilage inside the knee joint called menisci, which act as shock absorbers between the femur and tibia. They will also need repairing along with the cruciate ligament itself.

The inevitability of surgery largely depends on the weight of your dog. Dogs weighing less than 10kg (22lbs) may get away with not having an operation, but they will have to stay largely confined to the house for six weeks in order to recover.

If surgery is required, the operation will involve the surgeon inspecting the joint, removing fragments of the ruptured ligament and repairing the menisci, before an artificial ligament is used to stabilise the joint and ensure that it retains as much normal function as possible.

Typically, the artificial ligament is placed outside the joint capsule of the knee joint. But newer surgical techniques are being developed, including both tibial plateau levelling osteotomy and tibial tuberosity advancement. These are said to be beneficial for larger, more athletic dogs for whom more weight and pressure is going through the joint.

What’s the outlook for a dog with cruciate ligament damage?

First and foremost, your concern should be ensuring that your dog puts their feet up, so to speak, in the six to eight weeks after surgery. This will give your hound the best chance of making a complete recovery.

Provided you stick to the vet’s instructions, good function should return to the limb within three months.

Caring for your dog in the weeks after surgery

Seeing how important rest and recuperation is for a dog after they’ve undergone the knife, it makes sense to include a section about the things you can do to make sure they look after themselves and don’t aggravate the operation site.

At first, having been under general anaesthetic, they might not be their usual self. They might be a little unsteady on their feet, so it’s important that you keep a close eye on them to ensure they don’t find themselves toppling over and hurting themselves.

Even if your dog is a little out of sorts, they should still be bright and responsive, listening to your commands (as much as they usually do, at least) and being happy to just chill in the part of the house that they’ve made their own. If they can’t get comfortable or show signs of a lack of alertness, make this known to your vet who will advise.

If you have young children, make sure that they are on their best behaviour around your recovering pooch. The last thing your dog needs right now is to be accidentally trampled on!

On the first night home after surgery, make sure your dog is not licking their wounds or doing anything to disrupt the stitches. As per the Animal Trust, your dog will probably be happy to just sleep off the anaesthetic, so don’t worry about staying awake all night watching them. It has been known!

Restricting your dog’s exercise after surgery

The difficult bit comes in trying to restrict your dog’s exercise once they feel something like their old selves again. Within a few days, they might think that they can jump on the sofa and run up the stairs. But this is a bad idea and needs to be discouraged.

That’s often easier said than done. Keeping your dog relatively still for six to eight weeks can feel like torture, especially if they are naturally energetic in their nature (some older dogs don’t know when to ‘retire’).

It might seem cruel, but if you are really struggling to keep your dog from doing the things they shouldn’t right now, you might have to restrict their movement by using a crate.

Remember, you are doing it for their own good, and it won’t be forever. If they’re not used to a crate and you’re worried about what this will do to your dog, speak to your vet about alternative ways to ensure your pet gets the controlled recovery it needs. 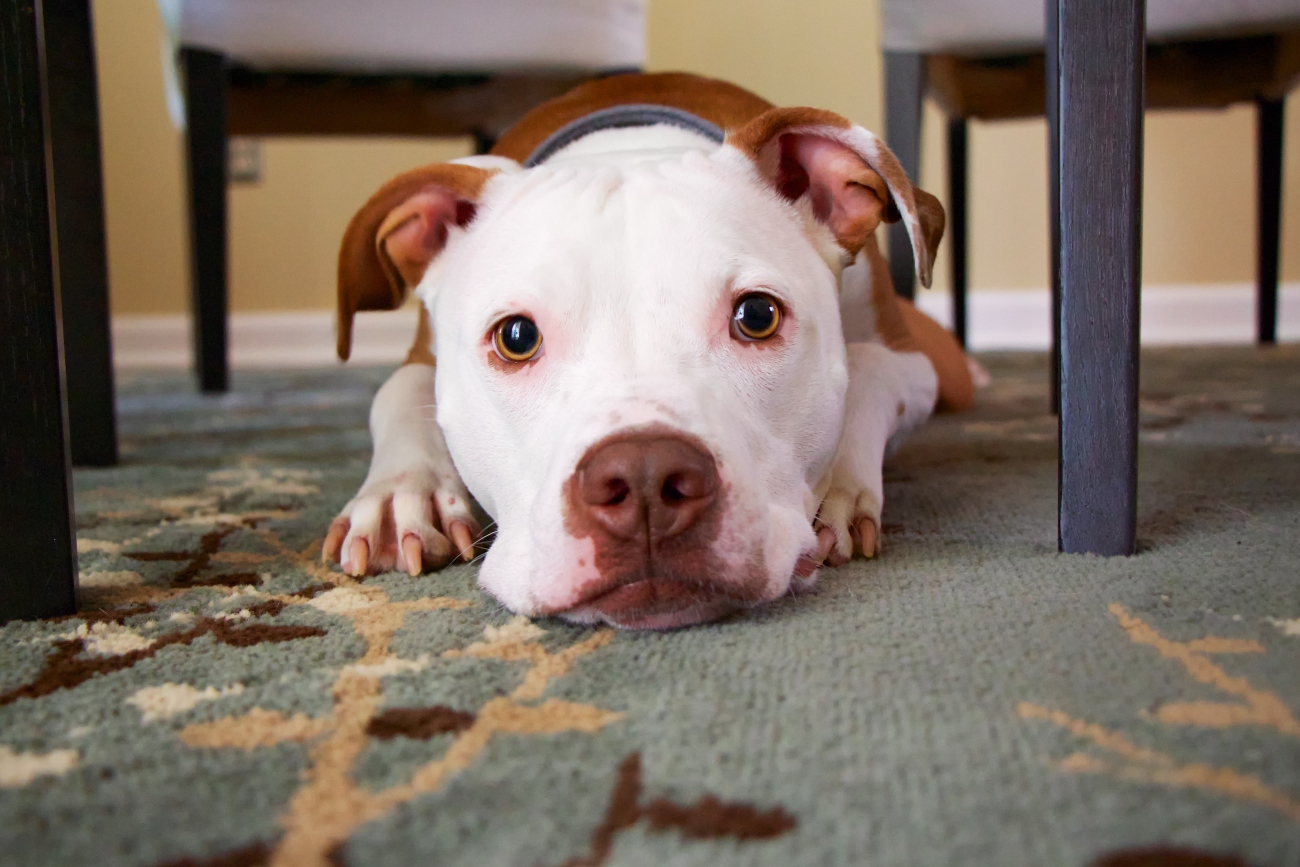 How can you prevent further cruciate ligament damage?

Following a complete rest and recovery period – and the vet is happy to ‘sign off’ your dog – you might want to reconsider what food you’re giving your hound.

With obese dogs thought to be more predisposed to developing a cruciate rupture – not to mention a raft of other serious health problems – you want to make sure that their weight is spot on. That doesn’t necessarily mean that you have to feed your dog less food – just more of the right stuff.

Given that they’ve just had a joint injury, you might want to look towards feeding them a diet which prevents and relieves joint problems. Foods that include turmeric and fish oil for example.

Caring for your older dog

An older canine recovering from cruciate ligament damage may also be reluctant to exercise again. But that doesn’t mean they have to go without – after all, no exercise means their weight will increase which will only make them suffer more.

Check out some of the best exercises for older dogs in our recent article. From scent games to swimming to agility training, you’re sure to find an exercise suitable for your older pooch here.

And talking of weight, has your older pup piled on the pounds during lockdown? They’re not alone. Check if what you’re feeding them makes a difference by reading our latest article here. And remember, by taking out insurance protection through Petwise, you can get a senior food contribution to help towards the cost of any special, age-related diets.

As well as putting your dog on a diet that is fit for their age and ailments, you might also want to invest in some pet insurance for senior dogs.

We can cover most older canines, including older rescue animals who haven’t had the best start in life.

You can choose from seven levels of pet insurance for older dogs to suit any budget or canine requirement. Dental cover is also included on all policies as standard.

If you need to make a claim, our caring team is always ready to help. And when your dog reaches the end of their life, we also provide a bereavement helpline and farewell cover to help you through that most difficult of times.

Protect your aging pet with Petwise – get a quote today.